The Finnish Teenage Boys Who Cook 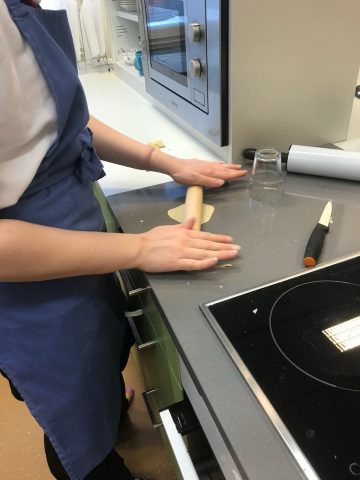 Team Learning Scoop is happy to collaborate with Dr. Timothy D. Walker  who is an American teacher living in Finland. We are pleased to share one of his posts here, too!

The Indian recipe said to grease the baking dish. This was my first task. The others on my cooking team had different jobs. One of the Finnish ninth graders was cutting up raw chicken. The other was mixing the ingredients for the sauce. I definitely had the easiest job. Or so I thought.

As I tentatively spread the margarine on the bottom of the baking dish, mounds of yellow kept forming. I had learned an obvious lesson: Cold margarine doesn’t spread easily. My knife was caked with it.

My Finnish colleague leaned over the dish and said, “Why don’t you use your hands?” I thought she was being sarcastic, but then I remembered, in my experience, that Finns are generally not as sarcastic as Americans. “Use my hands?” I said. “Really?”

She nodded. I knew that I could trust her; she was a veteran home economics teacher after all! I put the knife down on the counter, rolled up my sleeves, and pressed my fingers into the margarine. The stuff got under my fingernails, but I didn’t mind. Within a minute, I had greased the baking dish. I turned to the ninth graders and told them how I wished I had taken this class as an American student. 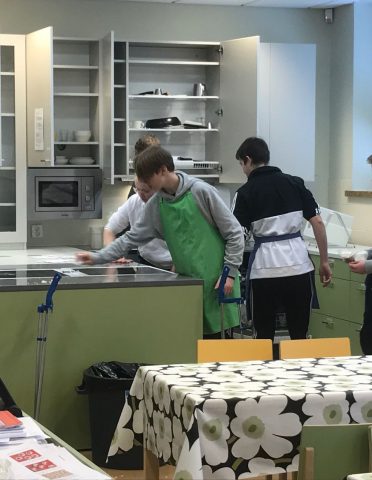 At my Finnish school, eighth and ninth graders can take this class as an elective. This makes sense to me. Home economics definitely seems like the kind of class that American students would need to sign up for.

I was especially surprised to see several boys who had elected to take this class. What’s more, they didn’t even look awkward in the kitchen. They were competent—and they weren’t joking around either. (Later, Finnish scholar Pasi Sahlberg—the author of Finnish Lessons—told me that home economics is the most popular elective for middle school boys in Finland!)

My Finnish colleague told me that all of her students have come a long way, especially the boys. I learned that all seventh graders across Finland are required to take home economics for three hours each week. I was floored. I couldn’t imagine having to take this class as an American middle school student.

In seventh grade, students have lots of opportunities to cook, but this isn’t the only activity during home economics. They’re wiping down the counters. They’re doing dishes. They’re also doing laundry. (Of course, their Finnish teacher isn’t going to wash their dirty aprons for them!)

There are two hours of “practice” each week, and there’s one hour of “theory.” I laughed when I first heard about “the theory of home economics”, but my colleague and her students didn’t think it was strange. This is the time that students learn about budgeting, energy-efficient practices, and nutritious eating. Another topic is setting the table. Students learn exactly where to place utensils, napkins, and glasses.

If I was back in seventh grade, I don’t know if I would have taken this part seriously. A lesson about setting the table? I found a ninth grader and asked her about this. When she was in seventh grade, did her classmates take this seriously?

She responded without hesitation, “Of course, this is what we need to know.” I was impressed. Learning practical skills is something that’s highly valued in Finland. My Finnish wife, Johanna, explained it perfectly, “This country is not preparing people to have housekeepers.” 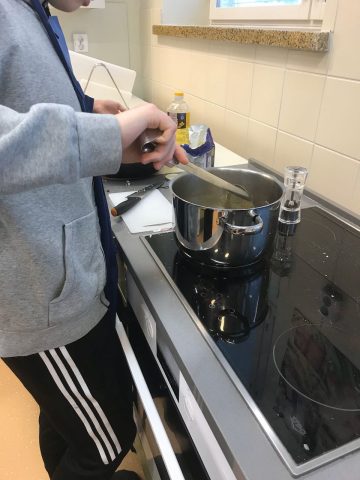 As I looked around the home economics classroom, I kept noticing the skillfulness of these students, evidenced by what they were producing at their kitchenettes. None of the tandoori chicken was overcooked or undercooked. The naan bread was fluffy and golden-brown. The basmati rice was soft, but not too soft. Working in teams of five to six people, they prepared all of these things within an hour. We even had time to spare, allowing us to sit down and eat the Indian meal unhurriedly. Of course, I found my fork and knife in the right places, too.

This kitchen experience got me thinking about my own strengths and weaknesses. I’m in the habit of telling people that I’m more of an “ideas” guy. Give me a pen and paper, or a book, and I’ll do some good work. But when it comes to producing with my hands, I’m a bit pathetic. I’ve assumed that I’ve been a thinker since the very beginning, but these ninth graders were pushing me to reconsider this notion. Do I see myself more of an “ideas” person because I didn’t have as many opportunities to produce with my hands as an American student?

My fifth graders spend four hours every week making things with their hands in art, woodwork, and textiles. In fact, they spend more class time on these subjects than math! (My fifth grade students have just three hours of math each week.) 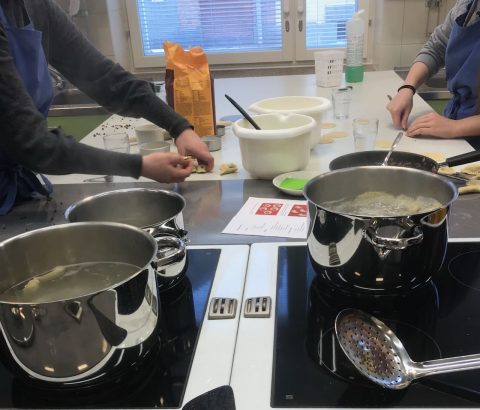 Since school started I haven’t heard anyone use the term “specials” to describe subjects like art, music, physical education (P.E.), textiles, woodwork, and foreign languages. This is a strange realization for an American teacher like me. “Specials” is a term that is firmly entrenched in the vernacular of most American educators and parents.

“Specials” implies that these classes have a different standing than subjects like English, math, history, and science. The message is that “specials” are not as foundational for students. They’re extras.

In Finland, “specials” are not bonus classes. Exactly half of my students’ classroom hours are made up of art, music, P.E., textiles, woodwork, and foreign language studies. Out of 26 total hours of classes, 13 are devoted to “specials.” Three hours are allocated for math and music each week.

I wonder if this well-rounded curricula continues to exist in Finland because standardized testing is almost entirely absent. Students in Finland are tested at the end of high school, but according to my Finnish colleagues, these tests do not interfere with teaching and learning at the elementary and middle school levels. Over the last two decades in the United States, greater emphasis on the tested subjects (literacy and math, specifically) has narrowed the curricular experience of American children.

My experience in the home economics classroom has shown me that all boys can cook and subjects like music, art, and woodwork are not “specials” but essentials. Also, I’m starting to see that I’m not just an “ideas” person. Every student, including older ones like me, can become competent in lots of different areas. Students need an education that provides them with lots of diverse opportunities to produce with their heads and hands. In Finland, I’m seeing what this delicate balance looks like.

Timothy D. Walker is an American teacher living in Finland and the author of the new book Teach Like Finland: 33 Simple Strategies for Joyful Classrooms. He is a contributing writer on education issues for The Atlantic. This blogpost was originally published here.